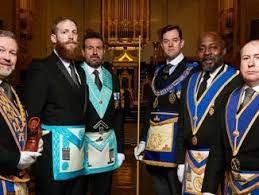 On December 27th, 2019, Richard Maggio was installed as the 90th Grand Master of Masons in Massachusetts. Maggio is following in the footsteps of Past Grand Masters like Paul Revere and General Joseph Warren. The office of Grand Master is a volunteer position; the Grand Master is elected and installed on an annual basis. Tradition dictates that first-year Grand Masters are re-elected for a second and third year before another new Grand Master is elected.As Grand Master, Maggio presides over more than 23,000 Masons and 215 lodges throughout the Commonwealth. The Grand Lodge of Masons in Massachusetts was chartered in 1733, following the establishment of the Grand Lodges of England in 1717 and Ireland in 1725. This makes Massachusetts the third oldest Grand Lodge in the world and the oldest in the Western Hemisphere. Maggio is considered to be the third “ranking” Mason in the world due to this precedent.The Grand Master has two distinct responsibilities. In this capacity he has numerous ceremonial privileges. He ensures the activities taking place within the jurisdiction comply with the Constitutions and Regulations of the Grand Lodge. The second responsibility he has is leading the business of the Grand Lodge, including:

Maggio was raised in Winchester and graduated from Winchester High School. He worked for 45 years as a general contractor with his father William and brother Robert until he retired in 2015.In 2000, he began his Masonic career by joining William Parkman Lodge in Winchester. He served as the Worshipful Master, or presiding officer of the lodge, in 2005-2006. Masons use the original definition of the word worshipful: honorable. English mayors and judges are addressed by the title of “Worshipful” even today. As Grand Master, members of the fraternity will call Brother Maggio “Most Worshipful.”He is also a member of several other Masonic lodges, including Golden Rule Lodge in Wakefield, Mount Horeb Lodge in Woburn, Wisdom Lodge in West Stockbridge, Mount Holyoke Lodge in South Hadley and The Master’s Lodge in Needham. His service to the Grand Lodge began in 2009 when he was appointed District Deputy Grand Master for the 13th Masonic District. In 2015, he was elected to serve as Junior Grand Warden of the Grand Lodge, the fourth highest position a Mason can hold in the state.In that same year, Maggio also received the Henry Price Medal, the most prestigious honor conferred by the Grand Lodge of Massachusetts. In 2012, Maggio began spearheading the campaign to launch the Massachusetts Freemasonry vanity license plate, which is now available through the Registry of Motor Vehicles in large part because of his efforts.He has been active in several Masonic organizations in his lifetime. Maggio is a member of several organizations under the York Rite of Freemasonry. He is a member of Saint Paul’s Royal Arch Chapter, Orient Council of Royal and Select Master Masons, and Saint Bernard Commandery #12.He also belongs to the Ancient Accepted Scottish Rite of the Northern Masonic Jurisdiction, as be became a 32° Mason in the Valley of Boston in 2003. Maggio is also a Shriner, as a member of the Aleppo Temple in Wilmington, as well as the Massachusetts College of Societas Rosicruciana in Civitatibus Foederatis.R.W. Peter M. Culbertson

He is the owner and operator of Culbertson Woodworking, located in Nantucket & Newbury, MA. He and his wife Debbi live in West Newbury, and have two adult children.Brother Culbertson began his Masonic career in 2007 when he joined Union Lodge in Nantucket. He served as the Worshipful Master (or presiding officer) from October of 2010 to October of 2011. Masons use the original definition of the word worshipful: honorable. English mayors and judges are addressed by the title of “Worshipful” even today. As Deputy Grand Master, members of the fraternity will call Brother Culbertson “Right Worshipful.” He is currently the membership representative for his lodge.He began his service to the Grand Lodge as a Grand Steward in 2014. He was then appointed to serve as the District Deputy Grand Master for the 20th Masonic District in 2016 and 2017. Culbertson received the Joseph Warren Distinguished Service Medal, the highest honor a lodge can award one of its members, in 2018. In addition to serving as Deputy Grand Master for 2020, he also serves as a member of the Grand Lodge’s Board of Directors.Active in several Masonic organizations, Culbertson is a 32° Mason in the Ancient Accepted Scottish Rite – Valley of Boston. He is a member of Isle of the Sea Royal Arch Chapter, Boston Council of Royal & Select Master Masons, and St. Bernard’s Commandery No. 12. He is also a member of the Aleppo Shrine Temple in Wilmington.R.W. George F. Hamilton

George Forest Hamilton of Westborough was installed Senior Grand Warden for 2021 in a ceremony at the fraternity’s Boston headquarters on Friday, December 27th. The Senior Grand Warden is the second highest ranking elected officer of the Grand Lodge of Massachusetts, comprised of over 23,000 members in more than 215 lodges statewide. He will serve for one year.Hamilton was elected at the Grand Lodge Annual Communication on Wednesday, December 9th. As Senior Grand Warden, he will assist Richard Maggio, Grand Master and the presiding officer in the state, for the coming year. He also serves as Grand Master Pro Tempore in the absence of the Grand Master and Deputy Grand Master. Maggio, of Winchester, MA, was installed for his second term as Grand Master of Masons in Massachusetts at the same ceremony.Hamilton was born in Ware, MA and attended Northborough public schools. He graduated with honors from Algonquin Regional High School in 1981. He enrolled in the college of engineering at the University of Lowell, where he graduated in with a Bachelor of Science in Electrical Engineering in 1985. Brother Hamilton retired from General Dynamics Corporation in 2018 following a 33 year career with that company. His responsibilities included numerous positions within engineering, business, and executive management.Brother Hamilton began his Masonic career in 1984 when he joined Alpha Lodge in Framingham. He served as the Lodge’s Worshipful Master, or presiding officer, from September of 1988  until August of 1990. Masons use the original definition of the word worshipful: honorable. English mayors and judges are addressed by the title of “Worshipful” even today. As Senior Grand Warden, members of the fraternity will call Brother Hamilton “Right Worshipful”.Hamilton first served the Grand Lodge as Grand Standard Bearer in 2007. He has also served on Grand Lodge’s Board of Directors since December of 2018.Active in several Masonic organizations, Hamilton is a 33° Mason in the Ancient Accepted Scottish Rite’s Valley of Boston, which he joined in 1986. He served as Mount Olivet Chapter’s ranking officer, the Most Wise Master, from 2014 to 2017.   He is currently an Active Member of the Supreme Council for Massachusetts. He also belongs to the York Rite’s Concord Royal Arch Chapter ,  Adoniram Council of Royal & Select Master Masons and is a member of Saint Bernard Commandery No 12 in Boston.He currently resides in Westborough with his wife Theresa. They have two adult children.